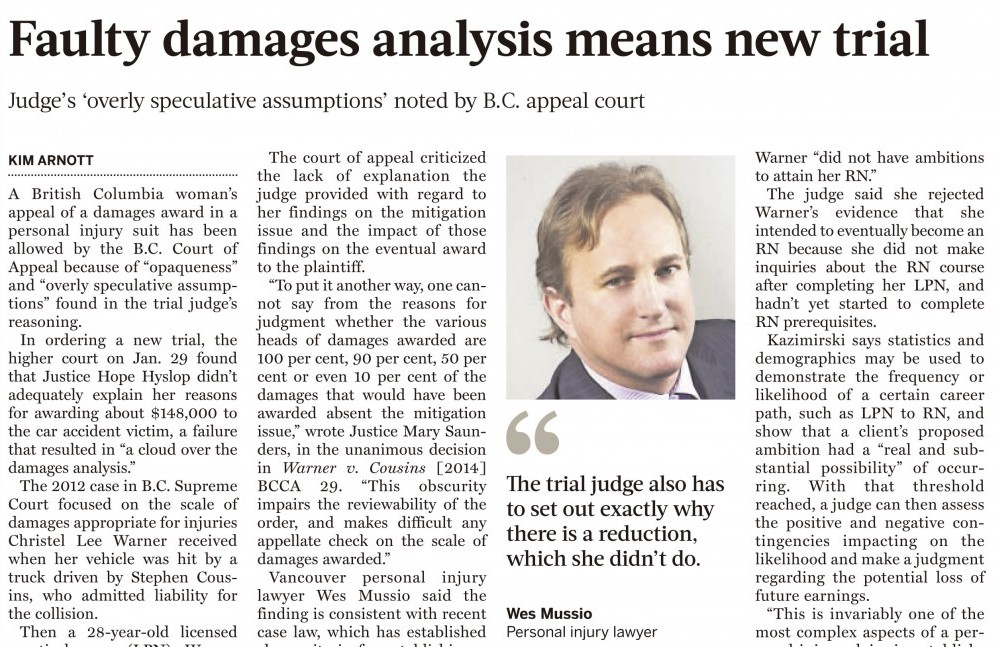 Lawyers Weekly Recently Featured Mussio Goodman Lawyer As previously discussed, injured claimants must take reasonable steps to restore themselves to their pre-accident condition, which includes following the advice of their doctors. In the trial of Warner v. Cousins, the judge found that the Plaintiff failed to mitigate her damages and reduced the award as a result. The […]

Mussio Goodman Wins Against ICBC in Court As previously discussed, when an injured motorist first informs ICBC of the accident, one of the questions they may be asked is whether they were working at the time of the collision. The reason is, if both drivers involved in the accident were “workers” as defined by the […]

Court Awards Our Client $204,000 For ICBC Blunder As we recently announced, after our client rejected ICBC’s $25,000 offer, we proceeded to trial and were awarded $204,000 in the Supreme Court of British Columbia. With any successful judgment, we were also awarded “costs”, which is essentially an award of additional money to compensate for the work […]

Mussio Goodman Wins Another WCB Tribunal Decision Against ICBC When an injured motorist first informs ICBC of the accident, one of the questions they may be asked is whether they were working at the time of the collision. This is because, if both drivers were “workers” as defined by the Workers Compensation Act, there can […]

Mussio Goodman has Successfully Won $290,400 for Our Client We are pleased to announce that, after declining ICBC’s offer to settle for $115,000, our client proceeded to a two week jury trial resulting in an award of $290,400. The primary issue in this case was “causation”. In April 2009, our client was rear-ended at a […]